Differentiation is a process of finding a function that outputs the rate of change of one variable with respect to another variable.

Informally, we may suppose that we're tracking the position of a car on a two-lane road with no passing lanes. Assuming the car never pulls off the road, we can abstractly study the car's position by assigning it a variable, <math>x</math> . Since the car's position changes as the time changes, we say that <math>x</math> is dependent on time, or <math>x=f(t)</math> . This tells where the car is at each specific time. Differentiation gives us a function <math>\frac{dx}{dt}</math> which represents the car's speed, that is the rate of change of its position with respect to time.

Historically, the primary motivation for the study of differentiation was the tangent line problem: for a given curve, find the slope of the straight line that is tangent to the curve at a given point. The word tangent comes from the Latin word tangens, which means touching. Thus, to solve the tangent line problem, we need to find the slope of a line that is "touching" a given curve at a given point, or, in modern language, that has the same slope. But what exactly do we mean by "slope" for a curve?

But how can you find the slope of, say, <math>y=\sin(x)+x^2</math> at <math>x=1.5</math> ? This is in general a nontrivial question, but first we will deal carefully with the slope of lines.

The Slope of a Line[edit] 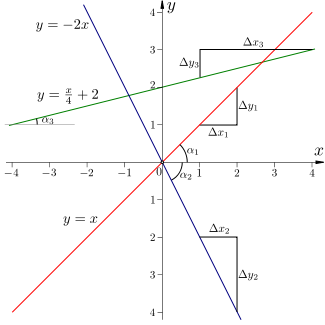 The slope can be defined in two (equivalent) ways. The first way is to express it as how much the line climbs for a given motion horizontally. We denote a change in a quantity using the symbol <math>\Delta</math> (pronounced "delta"). Thus, a change in <math>x</math> is written as <math>\Delta x</math> . We can therefore write this definition of slope as:

This leads to the very important result below.

Alternatively, we can define slope trigonometrically , using the tangent function:

where <math>\alpha</math> is the angle from the rightward-pointing horizontal to the line, measured counter-clockwise. If you recall that the tangent of an angle is the ratio of the y-coordinate to the x-coordinate on the unit circle, you should be able to spot the equivalence here.

Of a graph of a function[edit]

The graphs of most functions we are interested in are not straight lines (although they can be), but rather curves. We cannot define the slope of a curve in the same way as we can for a line. In order for us to understand how to find the slope of a curve at a point, we will first have to cover the idea of tangency. Intuitively, a tangent is a line which just touches a curve at a point, such that the angle between them at that point is 0. Consider the following four curves and lines:

A secant is a line drawn through two points on a curve. We can construct a definition of a tangent as the limit of a secant of the curve taken as the separation between the points tends to zero. Consider the diagram below.

As the distance <math>h</math> tends to 0, the secant line becomes the tangent at the point <math>x_0</math> . The two points we draw our line through are:

As a secant line is simply a line and we know two points on it, we can find its slope, <math>m_h</math> , using the formula from before:

(We will refer to the slope as <math>m_h</math> because it may, and generally will, depend on <math>h</math> .) Substituting in the points on the line,

This expression is called the difference quotient. Note that <math>h</math> can be positive or negative — it is perfectly valid to take a secant through any two points on the curve — but cannot be <math>0</math> .

The definition of the tangent line we gave was not rigorous, since we've only defined limits of numbers — or, more precisely, of functions that output numbers — not of lines. But we can define the slope of the tangent line at a point rigorously, by taking the limit of the slopes of the secant lines from the last paragraph. Having done so, we can then define the tangent line as well. Note that we cannot simply set <math>h</math> to 0 as this would imply division of 0 by 0 which would yield an undefined result. Instead we must find the limit of the above expression as <math>h</math> tends to 0:

Definition: (Slope of the graph of a function)

If this limit does not exist, then we say the slope is undefined.

This last equation is just the point-slope form for the line through <math>(x_0,f(x_0))</math> with slope <math>m</math>.

The Rate of Change of a Function at a Point[edit]

Consider the formula for average velocity in the <math>x</math> direction, <math>\frac{\Delta x}{\Delta t}</math> , where <math>\Delta x</math> is the change in <math>x</math> over the time interval <math>\Delta t</math> . This formula gives the average velocity over a period of time, but suppose we want to define the instantaneous velocity. To this end we look at the change in position as the change in time approaches 0. Mathematically this is written as: <math>\lim_{\Delta t\to 0}\frac{\Delta x}{\Delta t}</math> , which we abbreviate by the symbol <math>\frac{dx}{dt}</math> . (The idea of this notation is that the letter <math>d</math> denotes change.) Compare the symbol <math>d</math> with <math>\Delta</math> . The idea is that both indicate a difference between two numbers, but <math>\Delta</math> denotes a finite difference while <math>d</math> denotes an infinitesimal difference. Please note that the symbols <math>dx</math> and <math>dt</math> have no rigorous meaning on their own, since <math>\lim_{\Delta t\to 0}\Delta t=0</math> , and we can't divide by 0.

The Definition of the Derivative[edit]

Most of the time the brackets are not needed, but are useful for clarity if we are dealing with something like <math>D(f\cdot g)</math> , where we want to differentiate the product of two functions, <math>f</math> and <math>g</math> .

The first notation has the advantage that it makes clear that the derivative is a function. That is, if we want to talk about the derivative of <math>f(x)</math> at <math>x=2</math> , we can just write <math>f'(2)</math> .

In any event, here is the formal definition:

no matter what <math>x</math> is. This is consistent with the definition of the derivative as the slope of a function.

What is the slope of the graph of <math>y=3x^2</math> at <math>(4,48)</math> ? We can do it "the hard (and imprecise) way", without using differentiation, as follows, using a calculator and using small differences below and above the given point:

But, to solve the problem precisely, we compute

We were lucky this time; the approximation we got above turned out to be exactly right. But this won't always be so, and, anyway, this way we didn't need a calculator.

Finding this derivative is a bit complicated, so we won't prove it at this point.

The derivative notation is special and unique in mathematics. The most common notation for derivatives you'll run into when first starting out with differentiating is the Leibniz notation, expressed as <math>\frac{dy}{dx}</math> . You may think of this as "rate of change in <math>y</math> with respect to <math>x</math>" . You may also think of it as "infinitesimal value of <math>y</math> divided by infinitesimal value of <math>x</math>" . Either way is a good way of thinking, although you should remember that the precise definition is the one we gave above. Often, in an equation, you will see just <math>\frac{d}{dx}</math> , which literally means "derivative with respect to x". This means we should take the derivative of whatever is written to the right; that is, <math>\frac{d}{dx}(x+2)</math> means <math>\frac{dy}{dx}</math> where <math>y=x+2</math> .

As you advance through your studies, you will see that we sometimes pretend that <math>dy</math> and <math>dx</math> are separate entities that can be multiplied and divided, by writing things like <math>dy=x^4dx</math> . Eventually you will see derivatives such as <math>\frac{dx}{dy}</math> , which just means that the input variable of our function is called <math>y</math> and our output variable is called <math>x</math> ; sometimes, we will write <math>\frac{d}{dy}</math> , to mean the derivative with respect to <math>y</math> of whatever is written on the right. In general, the variables could be anything, say <math>\frac{d\theta}{dr}</math> .

The process of differentiation is tedious for complicated functions. Therefore, rules for differentiating general functions have been developed, and can be proved with a little effort. Once sufficient rules have been proved, it will be fairly easy to differentiate a wide variety of functions. Some of the simplest rules involve the derivative of linear functions.

Derivative of a constant function[edit]

For any fixed real number <math>c</math> ,

The graph of the function <math>f(x)=c</math> is a horizontal line, which has a constant slope of 0. Therefore, it should be expected that the derivative of this function is zero, regardless of the values of <math>x</math> and <math>c</math> .

The definition of a derivative is

Note that, in the second example, <math>z</math> is just a constant.

Derivative of a linear function[edit]

The special case <math>\frac{dx}{dx}=1</math> shows the advantage of the <math>\frac{d}{dx}</math> notation—rules are intuitive by basic algebra, though this does not constitute a proof, and can lead to misconceptions to what exactly <math>dx</math> and <math>dy</math> actually are.

The graph of <math>y=mx+c</math> is a line with constant slope <math>m</math>.

Since we already know the rules for some very basic functions, we would like to be able to take the derivative of more complex functions by breaking them up into simpler functions. Two tools that let us do this are the constant multiple rule and the addition rule.

For any fixed real number <math>c</math> ,

The reason, of course, is that one can factor <math>c</math> out of the numerator, and then of the entire limit, in the definition. The details are left as an exercise.

We already know that

Another simple rule for breaking up functions is the addition rule.

The Addition and Subtraction Rules[edit]

The fact that both of these rules work is extremely significant mathematically because it means that differentiation is linear. You can take an equation, break it up into terms, figure out the derivative individually and build the answer back up, and nothing odd will happen.

We now need only one more piece of information before we can take the derivatives of any polynomial.

This has been proved in an example in Derivatives of Exponential and Logarithm Functions where it can be best understood.

Since polynomials are sums of monomials, using this rule and the addition rule lets you differentiate any polynomial. A relatively simple proof for this can be derived from the binomial expansion theorem.

This rule also applies to fractional and negative powers. Therefore

With these rules in hand, you can now find the derivative of any polynomial you come across. Rather than write the general formula, let's go step by step through the process.

The first thing we can do is to use the addition rule to split the equation up into terms:

We can immediately use the linear and constant rules to get rid of some terms:

Then use the power rule to work with the individual monomials:

And then do some algebra to get the final answer: